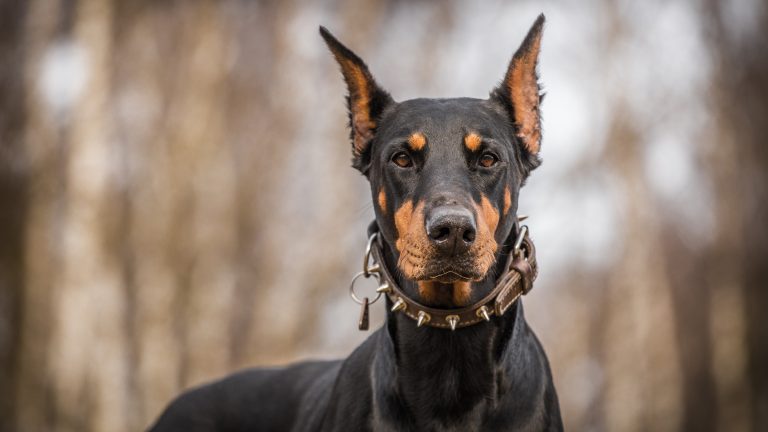 Introduction to the Doberman Pinscher

Determined, loyal, obedient, energetic, and fearless, the Doberman Pinscher is the iconic watchdog.

The breed does make a good guard dog but they are highly intelligent and wonderful companion dogs.

They are not the best breed for everyone. Ideally the Doberman should have an owner who is also intelligent and able to provide good training, socialization, and plenty of daily exercise. The Doberman Pinscher is an athletic dog who needs mental and physical challenges to be happy. He can be a good family dog but he needs an owner who is able to guide him.

History of the Doberman Pinscher

Unlike many breeds whose histories are unknown, the Doberman Pinscher was developed by one man in one place. The man’s name was Karl Friedrich Louis Dobermann and he was a tax collector in Apolda, Germany. Being a tax collector was a dangerous job apparently, and Dobermann was subject to being robbed. He wanted to develop a dog for protection. Coincidentally, Dobermann also ran the local dog pound, giving him access to lots of dogs. He solved his problem by using lots of different dogs available to him to create the kind of dog he wanted for his personal protection. He wanted a dog that was strong, fast, loyal, intelligent, fierce, and had endurance. Some of the breeds used to create Louis Dobermann’s dog included the Beauceron, the German Pinscher, the Rottweiler, the Greyhound, the Weimaraner, the Great Dane, the Manchester Terrier, the German Shorthaired Pointer, the old German Shepherd Dog (not the later German Shepherd developed by for police work, but the dog used for farm work), the Thuringian Sylvan Dog, and the Thuringian Shepherd Dog.

After Doberman’s death in 1894, other breeders continued his work with the breed. The breed was given Doberman’s name after his death. The American Kennel Club recognized the breed in 1908. Dobermans were used as police and military dogs throughout the 20th century. During WWII the Doberman was the official War Dog of the U.S. Marine Corps. Today the Doberman Pinscher is the 14th most popular breed of dog in the United States, according to the AKC, out of nearly 200 breeds and varieties.

Because of their intelligence and great athleticism, Dobermans can excel at virtually every dog activity. They are particularly well-suited to obedience, search and rescue, agility, work as a service dog, and Schutzhund.

Although the Doberman was developed from a wide variety of breeds, which might suggest a certain hybrid vigor, the breed does have several health issues that can be serious. Dilated cardiomyopathy is a leading cause of death in Dobermans and it affects this breed more than any other. An estimated 40 percent of all dogs diagnosed with dilated cardiomyopathy are Doberman Pinschers. Most Dobermans who are affected by the disease only live about two months after a diagnosis. Research is ongoing.

Dobermans can also be affected by cervical vertebral instability (CVI). Von Willebrand’s is another issue that occurs in Doberman’s (and some other breeds). This is a bleeding disorder similar to hemophilia in humans. There is now a genetic test so the potential parents of a litter can be tested for the carrier gene and the inheritance of the disease can be avoided.

Other issues found in the breed less commonly include hypothyroidism and hip dysplasia.

Canine compulsive disorder also appears with some frequency in Dobermans.

If you are thinking of breeding your Doberman Pinchser, the Doberman Pinscher Club of America recommends the following health tests:

Louis Dobermann wanted a dog who could provide protection since he was a tax collector and often subject to being robbed by bandits. The first Doberman Pinschers were bred to be fierce, intimidating dogs, able to be aggressive when necessary. The breed has been kept as a dog for personal defense, a police dog, a military dog, and done many kinds of work that required fearlessness, intelligence, and obedience.

Over the years since the breed was founded, however, Doberman breeders have changed the breed’s temperament so that the dogs are much more desirable as companion dogs these days. Today the aggression in the breed has been replaced with a temperament that is good-natured and steady. Dogs are highly intelligent, very loyal, and easy to train. Dobermans are still good watchdogs and fearless, able to protect their families, but they are much better as a family dog today than they were 100 years ago.

A Doberman should always be well-socialized from a young age and needs good obedience training. They can get along well with other pets, including dogs, and be respectful of people you invite into your home. However, Dobermans are considered to be more likely to show aggression toward strangers and unknown dogs than some breeds (though not the most aggressive). They are very unlikely to ever show aggression toward their owners.

Studies suggest that Dobermans bred in North America have a calmer and more even temperament than dogs bred in Europe. This may be due to the emphasis placed on family dog ownership in the U.S. and Canada. There were also several movies that depicted the Doberman as being aggressive in the 1970s which may have caused North American Doberman breeders to pay special attention to temperament.

The Doberman Pinscher is considered to be one of the most intelligent of all breeds. Dr. Stanley Coren ranks the breed at #5 in terms of intelligence in his book The Intelligence of Dogs. Dobermans are also gentle and devoted to their families – something that is often overlooked when people only see them as guardians.

Doberman Pinschers are very active, athletic dogs and they need plenty of daily exercise. Since they are very intelligent dogs, a Doberman does best in a home where someone has plenty of time to train the dog and preferably spend time doing some activities together. The Doberman Pinscher often makes a good dog for someone who already has some experience owning a dog. They are a lot of dog.

The Doberman has a short, smooth coat that is easy to groom. You can use a hound glove or a slicker brush, or a simple boar bristle brush to brush the coat a couple of times per week. This should remove loose hair and any dirt. Bathe as needed.

In North America the Doberman has cropped ears and a docked tail.

Grooming a Doberman Pinscher is similar to grooming other dogs. You will need to check and clean your dog’s ears, keep his nails trimmed, and maintain his teeth in good condition.

What is a Doberman Pinscher’s Life Expectancy?

According to a UK health survey conducted by the Kennel Club in 2004, the median lifespan of the Doberman Pinscher is 10 years and 6 months. The leading causes of death were cancer (26 percent), old age (22 percent), and cardiac problems (15 percent). The oldest Doberman in the survey lived to be 16 years and 6 months old.

Are Doberman Pinschers easy to train?

Dobermans are extremely intelligent and are considered easy to train. However, they can be a little stubborn at times. Training a Doberman does take consistency. You need to train daily in a couple of short sessions. Dobermans are not as eager to please as some breeds, but they can learn easily. They can excel at many dog activities and they enjoy doing things with their owners. They like having a job to do.

Do Doberman Pinschers shed a lot of hair?

No, Dobermans don’t shed a lot. They are a shorthaired breed that requires regular brushing. They shed a moderate amount year-round. They don’t have the thick undercoat that some shorthaired dogs have.

While Dobermans are not the first breed you think of when you think of bloat (gastric dilatation volvulus), they are a large, deep-chested breed and bloat does sometimes occur. Keep meals small and feed 2-3 meals per day so your dog doesn’t have an empty stomach for long periods of time.

Are Doberman Pinschers good with Children?

Yes, Dobermans are good with children. They are loving, devoted, affectionate, and protective toward children. However, any Doberman that spends time with kids needs to be well-socialized and well-trained. As always, it’s important that an adult supervise when children and dogs play together. Accidents can happen very quickly. Teach your children how to play gently with a dog.